Here we are, our first Father’s Day without dad. It’s a heartbreaker, but I take comfort in knowing that he left this Earth as a grateful man who loved well and was well loved. A person can’t really ask for more, in my opinion.

Today I wanted to share a bit of what I said at dad’s funeral. My brothers and I stood up on the alter together, each sharing our thoughts about dad. Afterward, we played a song called “No Hard Feelings” by The Avett Brothers. I included the lyrics below. 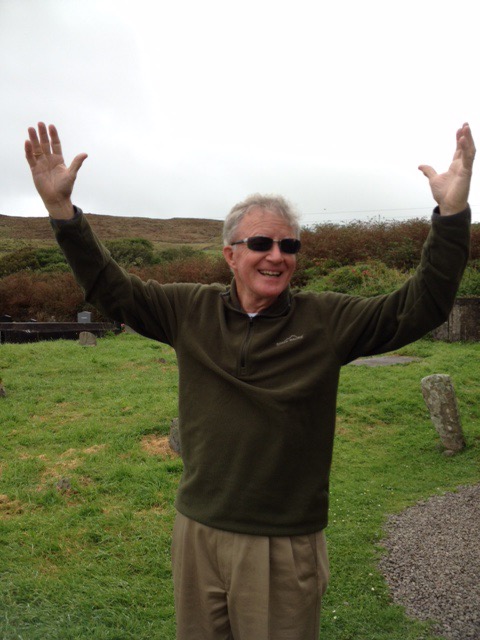 Dad understood that the secret to life is gratitude.

When he and I would play a board game or card game together, if I were on a winning streak, he’d shake his head and say, “Bethany Anne, you are DIPPED in it.” Of course contextually I always understood his meaning, though it seemed an odd expression.

I Googled the actual definition yesterday and it read, “A person who is extremely lucky over a period of time.” Without question, when it came to life, my dad knew he was “dipped in it.” I hope he understood that while he may have been blessed with a dash of luck, it was who he was as a man that allowed for his beautiful life to unfold as it did.

That being said, dad would want “his better half” to be fully acknowledged in the story of who he was as a man, and the life he led. My parents met before dad was even a man at all. To hear him tell it, he was ruined for all other girls once he laid eyes on my mother, Betty Lou Oakley, at the age of fifteen. They had their stops and starts through high school and college, but their overall love story spanned fifty-five of his seventy years. They say you’re only as good as the people with whom you surround yourself. My parents chose wisely. I don’t think either of them ever really doubted that, through over 45 years of marriage.

I believe he left his Earthly body with few regrets, aside from leaving us all when we were still having so much fun. It feels as though he had only just begun to warm up on the dance floor of life.

Dad’s death was a shock. He worked a full day at the office, came home and ran on the treadmill, hopped off singing (out of tune, of course) and moments later, he collapsed. He stayed with us for nine more days, but never regained consciousness. I believe this was his final act of graciousness – to give his family time to hold his hand, shower him with love, and to finally accept (if not to understand why) he had to go.

A testament to the life he led, and the love he shared so freely, during those final days that his loved ones spent at his bedside:

There were no amends to be made.

There were no regrets over harsh words having been spoken.

There was no fear that he didn’t know how much he was loved.

There was no insecurity about how he had felt about each of us.

In the end, there was only love.

No Hard Feelings by The Avett Brothers

Will I be ready?

Will my hands be steady?
When I lay down my fears

My hopes and my doubts

The rings on my fingers

And the keys to my house

With no hard feelings

When the sun hangs low in the west

And the light in my chest

Won’t be kept held at bay any longer

When the jealousy fades away

And it’s ash and dust for cash and lust

Love in the songs they sing in the church

And no hard feelings

Much good for anyone

Kept me afraid and cold

With so much to have and hold

When my body won’t hold me anymore

And it finally lets me free

Where will I go?

Will the trade winds take me south

Through Georgia grain or tropical rain

Or snow from the heavens?

Will I join with the ocean blue

Or run into the savior true

And walk through the night

Straight to the light

Holding the love I’ve known in my life

And no hard feelings

Much good for anyone

Kept me afraid and cold

With so much to have and hold

Under the curving sky

It matters for me and you

To say it and mean it too

For life and its loveliness

And all of its ugliness

Good as it’s been to me